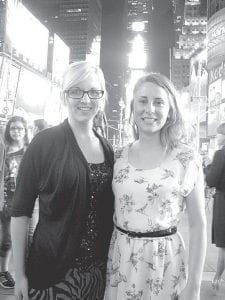 Taylor D’Alelio, a Pettisville High School junior, left, and Taylor Herschberger, a freshman, at Times Square in New York City. The two girls and Rebecca Dorosz, a PHS teacher, traveled to the city so the girls could receive writing awards.– courtesy photo

Taylor D’Alelio, a junior, received a silver medal for her poem, “Brothers.”

Taylor Herschberger, a freshman, received a silver medal for her short story, “The Jadeite Gem.”

Their works were two of 230,000 art and writing submissions.

Out of those, only 1,900, about eight-tenths (.8) of one percent, received national awards.

Rebecca Dorosz, a PHS teacher who accompanied the girls, said, “It really struck me, sitting there and looking around Carnegie Hall, that the small school of Pettisville made such a large appearance at this type of awards ceremony.

“As I was talking with one teacher, he discovered there were two students from my school,” she said.

“He asked if it was a private school (as many are). I said no. Then he asked the size.

“When I told him we graduate about 45-50 each year, he was stunned. He said our school must have really high expectations if two of our students were honored.

“I could say with certainty that we do. It was such a phenomenal experience, and I’m so thankful for the support of such a wonderful school district.”