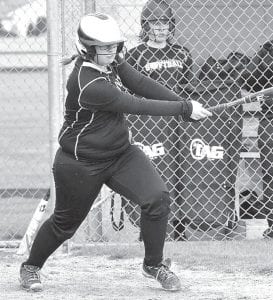 Kaija Blosser gets a base hit that scores a run against Stryker, Monday, April 11. The Birds beat the Panthers 12-2.– photo by Mario Gomez

Pettisville exploded for seven runs in the second inning and defeated Stryker 12-2 in six innings, Monday, April 11, at Stryker.

Kyra Behnfeldt was the winning pitcher. In six innings she allowed two runs on five hits, struck out nine, and walked none.

The Birds had 16 hits. Kaija Blosser and Amber Klopfenstein each had two doubles and a single. Mallory Riegsecker had two singles and a double, and Sami Tilley had a single and a double.

The Birds scored eight runs in the second, three in the third, and 10 in the fourth to defeat the Eagles 21-0, Thursday, April 14, at Pettisville.

Behnfeldt recorded a no-hitter, throwing 10 strikeouts and one walk.

PHS had nine hits, including a single and double from Barton and three singles from Behnfeldt. Sauder, Blosser, Sydney Purtee, and Gretchen Lee each hit a single.

With the score tied at 3 going into the eighth, the Cadets scored two runs in the top of the inning and Pettisville was unable to answer in the bottom of the inning, Friday, April 15, at Pettisville.

Behnfeldt was the hardluck loser. In eight innings she allowed five runs on seven hits, struck out 11, and walked two.

The Birds had nine hits. Barton had two singles and a double. Klopfenstein had a double; Behnfeldt, two singles; Tilley, Flory, and Jaelyn Rufenacht had a single each.