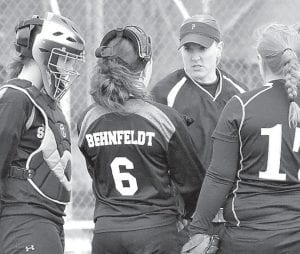 The Pettisville softball team is 5-3, 3-2 after beating Edon and Montpelier and falling to North Central last week.

The Birds scored at least two runs in each of the five innings played on their way to a 14-0 Buckeye Border Conference shutout at Edon, Monday, April 18.

Kyra Behnfeldt was the winning pitcher. In five innings she allowed no runs on five hits, struck out five, and walked two.

Pettisville recorded 16 hits. Jasmyn Barton had a two-run home run and a single to lead PHS. Marissa Beck had two doubles and a single, while Jaelyn Rufenacht had three singles.

Amber Klopfenstein and Mallory Riegsecker each hit a double, and Behnfeldt had two singles. Kaija Blosser, Sami Tilley, and Andrea Flory each hit a single.

Down 4-1 going into the bottom of the seventh, North Central scored four runs to defeat the Birds 5-4, Tuesday, April 19, in a BBC contest at Pioneer.

Behnfeldt was the losing pitcher. In 6 1/3 innings she allowed five runs on seven hits, struck out six, and walked two.

The Birds had 10 hits. Klopfenstein hit two singles and a double, while Barton had a single and a double.

The Birds led 5-0 after three and scored two runs in the sixth for a 7-0 nonleague shutout of the Locos, Saturday, April 23, at Montpelier.

Behnfeldt was the winning pitcher. In seven innings she allowed no runs on five hits, struck out seven, and walked one.

The Birds recorded 13 hits. Rufenacht had a single and a double; Klopfenstein and Barton hit three singles each.

Blosser hit two singles, while Flory, Beck and Sydney Purtee each had one.