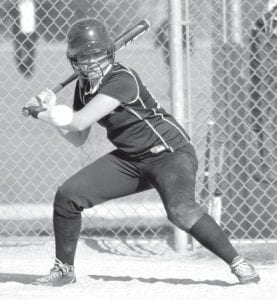 Ashlyn Bontrager had a double in Pettisville’s 10-2 win over Stryker, Thursday, April 12.– photo by Mario Gomez

The Pettisville softball team won all three of its games last week to raise its record to 6-3, 3-1 in the Buckeye Border Conference.

The Birds hosted Hilltop, Monday, April 9, and defeated the Cadets 6-3 for a BBC victory.

Pettisville was on the road to Stryker, Thursday, April 12, and came home with a 10-2 BBC win.

Tied at 1 after the first inning, the Cadets scored single runs in the second and fourth innings to take a 3-1 lead.

Pettisville came roaring back, scoring once in the fifth and four runs in the sixth for the 6-3 BBC victory.

Delaney Nofziger was the winning pitcher. In seven innings she allowed three runs on eight hits, struck out seven, and walked one.

Lexie King led PHS at the plate with two triples and two runs batted in. Audra Klopfenstein had two singles and a triple. D. Nofziger added a double. PHS 10, Stryker 2

The Birds led 3-0 after the first inning and 5-0 after three. They scored twice in the fifth and three times in the sixth for a 10-0 lead going into the bottom of the inning.

The Panthers scored twice for the 10-2 BBC final.

D. Nofziger was the winning pitcher. In seven innings she allowed two runs on five hits, struck out four, and walked none.

At the plate, Ashlyn Bontrager, Lauren Frey, and Kate Nofziger each had doubles. Emily Hubby had a triple, and Adi Bruner hit two singles. PHS 12, Holgate 1

PHS led 2-0 after one and scored six runs in the second and three in the third for an 11-0 lead heading into the fourth.

Both teams scored single runs in the fifth for the 12-1 final.

D. Nofziger was the winning pitcher. In five innings she allowed one run on three hits, struck out six and walked none.

King led PHS with two doubles and three RBIs. Bontrager hit a single and a double, and K. Nofziger hit a triple.