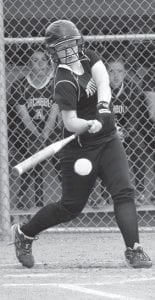 Kaija Blosser is safe on a fielding error in Pettisville’s game with Archbold.– photo by Mario Gomez

The Birds won the title outright in 2012, and share the 2013 title with Hilltop. Both finish with 8-2 league records.

“I’m proud of the girls for earning a part of another BBC title,” said Kendra Stahl, PHS head coach.

“We had a solid year last year, going 9-1 in the BBC. Then we lose six seniors and a key player from last year, and bring in nine freshmen on the team.

“You have to admit your doubts when playing inexperienced players.

“But expectation of winning another BBC title was still there, and hopefully that will never go away in the upcoming seasons.”

Delaney Nofziger pitched a complete game for PHS, and allowed no runs on five hits, struck out eight, and walked two.

The Panthers (8-15) scored single runs in the second and third innings while the Birds managed only one run in the fifth in a non-league battle, Tuesday, May 7, at Delta.

All runs scored were unearned.

Nofziger was the losing pitcher. In six innings she allowed two runs on two hits, struck out five, and walked none.

At the plate, E. Hubby hit a double. Nofziger, Blosser, and K. Riegsecker each hit singles.

Nofziger was the winning pitcher. In five innings she allowed one run on one hit, struck out seven, and walked none.

Klopfenstein led PHS at the plate with a single and a double. Olivia Wright hit a double, and Hannah Hoops, Nofziger, Blosser, and M. Riegsecker each hit a single.

The game report for Pettisville’s 16-1 loss to Archbold is elsewhere in this issue.

Pettisville was scheduled to play Stryker yesterday, Tuesday, in a Division IV sectional final at Stryker.

The Panthers defeated Holgate 4-3 in their sectional semifinal on Saturday, May 11.