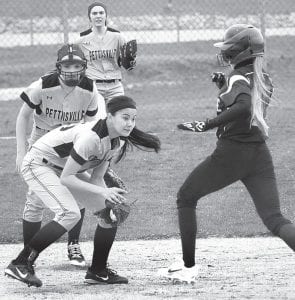 The Pettisville softball team labored through a tough five-game schedule last week, winning only once to drop the Birds to 3-7, 1-4 in the Buckeye Border Conference.

The Birds traveled to Montpelier, Monday, April 17, for a BBC contest.

Pettisville jumped out to a 3-0 lead after 1 1/2 innings, but the Locos tied the score in the third and took the lead for good in the fourth with two runs.

Montpelier added six more runs in the next two innings to take the 11-4 win.

Kyra Behnfeldt took the loss on the mound, giving up nine runs on 11 hits, striking out four, and walking one in five innings.

Lexi Sauder had a single and double, and Starr Kessinger had a pair of singles.

Pettisville was back on the road Tuesday, April 18, for a non-league game at Delta.

The game was scoreless until the sixth when Pettisville pushed across a pair of runs.

The Birds scored twice more in the seventh and held the Panthers to one run in the bottom half of the inning for a 4-1 win.

Behnfeldt went the distance, giving up one run on seven hits with five strikeouts and two walks.

Patrick Henry welcomed Pettisville, Friday, April 21 and made easy work of the Birds, winning a 10-0 nonleague shutout in five innings.

The Birds mustered only three hits on singles by Behnfeldt, Tilley and Brittney Sauder.

Pettisville traveled to Ayersville, Saturday, April 22, to compete in the Pilot Invitational.

The Birds trailed Continental 9-1 after three.

PHS closed the gap to 9-5 after five, but Continental scored three more runs in the sixth and seventh while the Birds scored twice in the fi- nal inning for the 12-7 final.

Mackenzie Morgan had two singles and a double, while L. Sauder had a single and double and Sydney Purtee had a double.

Morgan took the loss on the mound, giving up nine runs on 10 hits with a strikeout in three innings.

The Birds battled the Pilots in their second contest.

Ayersville led 3-1 until the fourth inning, when Pettisville scored three runs for a 4-3 lead.

The Pilots tied the game with a run in the bottom of the inning and scored a run in the fifth and three in the sixth for the 8-4 final.

Kessinger had a pair of singles. B. Sauder hit a double.