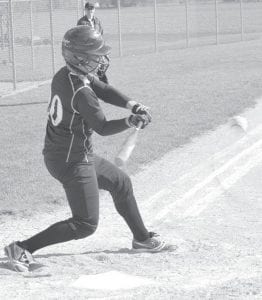 Kaitlin Nofziger, shown against Stryker on Thursday, April 12, hit three triples and a double in the Blackbirds’ 17-6 victory over Continental, Tuesday, April 17.– photo by Mario Gomez

The Birds opened the week with a 10-0 Buckeye Border Conference shutout of Fayette, Monday, April 16.

PHS exploded for seven runs in the fourth inning on its way to a 17-5 non-league victory at Continental, Tuesday, April 17.

Pettisville finished off its week by scoring in five of seven innings on its way to a 12-4 BBC win at Edon, Thursday, April 19.

The Birds and Blue Bombers share the lead in the BBC with 5-1 records. Pettisville is 12-4 overall. PHS 10, Fayette 0

The Birds led 1-0 after one and 6-0 after two. PHS finished its scoring with three runs in the fourth and one in the fifth.

Delaney Nofziger was the winning pitcher. In five innings she allowed no runs on three hits, struck out eight, and walked two.

Mikayla Smith was the hard-luck loser. In 4 1/3 innings she allowed 10 runs on 12 hits, struck out three, and walked four.

For Fayette, M. Garza had a double and Smith had a single. PHS 17, Continental 5

The Birds scored two runs in each of the first three innings to take a 6-2 lead. They led 13-2 going into the bottom of the fourth after the seven-run top of the inning.

The Pirates (3-7) scored three runs in the bottom of the fourth, but that was all for them.

Pettisville scored four more runs in the seventh for the 17-5 win.

D. Nofziger was the winning pitcher. In seven innings she allowed five runs on 11 hits, struck out five, and walked one.

PHS led 2-1 after two and 5-1 after three. Both teams scored twice in the fourth, and the Birds scored five runs in the sixth and seventh innings while the Blue Bombers (6-6) scored only once.

D. Nofziger was again the winning pitcher. In seven innings she gave up four runs on nine hits, struck out one, and walked one.

The Birds had 17 hits, including Klopfenstein, two singles, a double, and a tworun home run; King, double, home run; Bontrager and Hubby, each with a single and a double; Frey, three singles; Taylor Kruse, triple; and D. Nofziger, two singles.