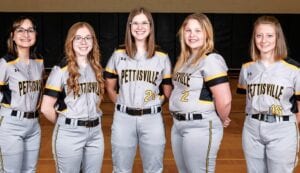 According to King and Bruner, the players have a great attitude and willingness to learn.

“We have a really fun group of girls who work hard and have great attitudes,” said King.

“Though we have a solid young core, our numbers aren’t where they need to be yet to allow for unexpected injuries or sickness that may happen throughout the course of a season.”

Assisting with coaching duties are Harrison King and Chris Richer.