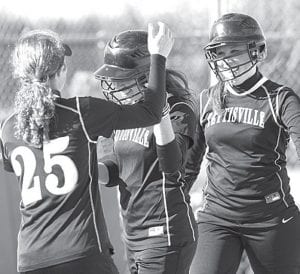 The Pettisville softball team took its place at the top of the Buckeye Border Conference standings with two victories last week.

After the Birds took a 2- 0 lead in the second inning, they scored three runs in the fourth and two in the sixth for the 7-0 final.

Pettisville totaled six hits, including a double and single by Audra Klopfenstein. D. Nofziger and Kate Nofziger each hit a double, while Lexie King and Ashlyn Bontrager each hit a single. PHS 9, LC 0 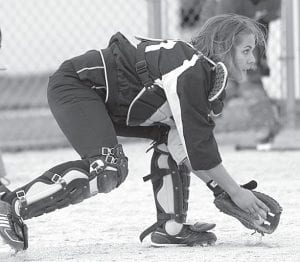 Pettisville senior Lauren Frey catches the ball at home plate, but it was too late as a Cadet had already scored.

D. Nofziger pitched her second shutout of the week against the Tigers (6-7). In seven innings she allowed no runs on two hits, struck out four, and walked two.

The Birds opened with a 1- 0 lead after the first inning. They followed with four runs in the third, one in the fourth, and three in the sixth.

PHS bats exploded for 16 hits. D. Nofziger was 3- 3 with two doubles and a single. King was 4-4 with a two-run home run and three singles.

The Birds jumped out to a 4-0 lead after the first two innings. Hilltop closed the gap to 4-3 with a run in the third and two in the fourth.

Pettisville’s four runs in the fifth and three in the sixth gave PHS an 11-3 cushion, but Hilltop came back in the bottom of the sixth with three runs to bring the Cadets back within five, 11-6.

Both teams scored single runs in the seventh for the 12-7 final.

“This was a good win for us,” said Kendra Stahl, PHS head coach. “We knew coming into the game that Hilltop was in the lead of the BBC along with us.

“We executed well offensively and defensively. Hilltop hit the ball well, and we made the plays when we needed to.

“We need to continue to stay focused and work hard as we wind up the season next week and head in strong for tournament.”

D. Nofziger was the winning pitcher. In seven innings she allowed seven runs on 10 hits, struck out one, and walked one.

K. Nofziger and Frey each had a single and a double. King had three singles, and Adi Bruner had two singles and a double. Tinora 6, PHS 4 PHS 9, Tinora 8

Both teams failed to score in the final three innings.

D. Nofziger was the losing pitcher. In seven innings she allowed six runs on four hits, struck out six, and walked four.

Pettisville had eight hits. D. Nofziger led the Birds with a home run. Klopfenstein had two singles; K. Nofziger, a single and a double; Kenzie Riegsecker and Hubby, a single each.

In the nightcap, Tinora led 8-7 going into the bottom of the seventh when the Birds scored two runs to take the 9-8 victory.

D. Nofziger was the winning pitcher. In seven innings she allowed eight runs on 11 hits, struck out six, and walked three.