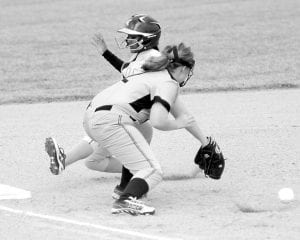 Kaylee Grimm fields the softball at third base against Montpelier, Thursday, March 28.– photo by Mario Gomez

Pettisville (0-4) was defeated by Wauseon 20-0 in five innings, Friday, April 5, in non-league softball action at Pettisville.

Mackenzie Morgan was the losing pitcher.

In five innings she allowed 20 runs on 21 hits, struck out none, and walked five.

Juli Spadafore pitched the no-hitter for the Indians.

The Birds (0-3 BBC) forfeited their Tuesday, April 2 Buckeye Border Conference contest at North Central due to a lack of players.