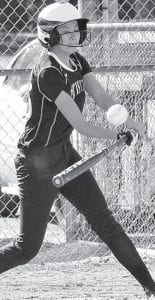 Sami Tilley at bat for the Birds.– photo by Mario Gomez

With the score tied at 1 going into the bottom of the sixth inning, the Indians scored four runs to take the win.

Kyra Behnfeldt was the losing pitcher. In six innings she allowed five runs on eight hits, struck out five, and walked four.

The Birds had two hits. Behnfeldt and Jaelyn Rufenacht each hit a single.