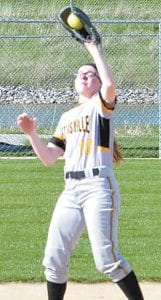 Elise Hartzler catches a fly ball for an out, Tuesday, April 23.– photo by Mario Gomez

The Pettisville softball team fell to 1-10, 0-7 in the Buckeye Border Conference with a non-league loss to Edgerton and BBC losses to Edon and Stryker last week.

Mackenzie Morgan suffered the loss on the mound. In five innings she allowed 11 runs on 11 hits, struck out two, and walked two.

Elise Hartzler got Pettisville’s only hit, a single.

Morgan suffered the loss. In three innings she allowed 13 runs on seven hits, struck out one, and walked two.

Pettisville had three hits, and was led by Morgan with a home run and a double.

Morgan was the hard-luck loser. In four innings she allowed 14 runs on 13 hits, struck out one, and walked one.

Starr Kessinger, Heather Sauder, and Kaylee Grimm each had a single for PHS.