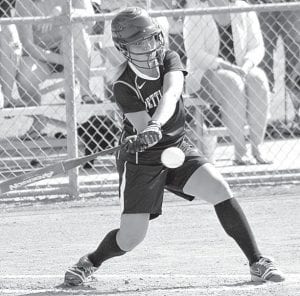 Pettisville finally broke the spell Antwerp has had over the Birds in the softball tournament the past two years, but couldn’t quite break Ayersville’s.

The Birds and Archers met up in the district semifinal at Bryan, Tuesday, May 15. Pettisville had a 7-0 shutout going until the bottom of the seventh, when Antwerp scored its only run.

The 7-1 victory sent the Blackbirds into the district final, Friday, May 18, when they met up with the Pilots.

With the score tied at 5 after five innings, Ayersville scored single runs in the sixth and seventh innings for a 7-5 victory, advancing the Pilots to the regional tournament.

Pettisville finished its season with an 18-7 record and a Buckeye Border Conference championship.

Taylor D’Alelio hits a grounder in the district final.– photo by Mario Gomez

Leading 2-0 after one inning, the Birds exploded for four runs in the fourth with two outs to take a 6-0 lead.

With the bases loaded, Audra Klopfenstein got a walk for the first run. Lexie King doubled to center field, bringing home two more runners for a 5-0 lead.

The Birds’ final run scored in the seventh inning.

The Archers’ only run scored with one out in the bottom of the seventh. Two Antwerp runners were left on base as Pettisville advanced to the district final with a 7-1 victory.

Antwerp finished its season with a 16-5 record.

Delaney Nofziger was the winning pitcher. In seven innings she allowed one run on five hits, struck out one, and walked one.

The Birds had seven hits, and were led by Kate Nofziger with a triple and a single.

Errors doomed the Birds as they committed nine in the district final.

“This was obviously not the way we wanted to go out tonight,” said Kendra Stahl, PHS head coach.

“It’s almost impossible to win a game with that many errors.

“We hit the ball well and got several runs ourselves, but we just gave Ayersville too many extra runners where most of them ended up scoring.”

The Birds led 2-1 after two. Both teams scored single runs in the third, and the Birds outscored the Pilots 2-1 in the fourth for a 5-3 lead.

The Pilots came back in the top of the fifth to tie the score at 5 with two runs of their own.

They led 6-5 after the top of the sixth and 7-5 going into the bottom of the seventh. Pettisville had two runners on base with two outs, but the Pilots (18-9) escaped with a force-out at third for the two-run victory.

D. Nofziger was the losing pitcher. In seven innings she allowed seven runs on 11 hits, struck out none, and walked one.

“This has been a great year for these girls,” said Stahl.

“We were outright league champs this year and went one step further in tournament than we have the last few years, and we were able to beat Antwerp to get to the district finals.

“They were great leaders and worked hard in everything they did.”