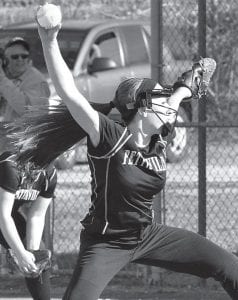 Kyra Behnfeldt delivers a pitch for the Birds.– photo by Mario Gomez

With four games cancelled last week, the Pettisville softball team evened its record at 1-1 with a 7-6 nonleague victory at Swanton, Tuesday, April 5.

Leading 6-2 after five innings, Pettisville scored what turned out to be the winning run in the top of the sixth.

The Bulldogs scored four runs in the bottom of the inning to give the Birds a scare, but were unable to score the tying run.

Kyra Behnfeldt was the winning pitcher. In seven innings she allowed six runs on nine hits, struck out 12, and walked two.