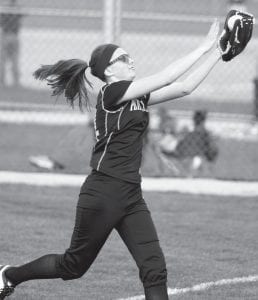 Pettisville rightfielder Andrea Flory catches a foul ball for the second out of the third inning against North Central, Tuesday, May 3.– photo by Mary Huber

Pettisville led 1-0 after one, 4-0 after three, and 5-0 after four before scoring four runs in the fifth.

Kyra Behnfelt was the winning pitcher. In seven innings she allowed no runs on one hit, struck out 10, and walked none.

The Birds had nine hits. Amber Klopfenstein led the team with two singles, a double, and four runs batted in.

Kaija Blosser had a double, while Jaelyn Rufenacht had two singles.

Behnfeldt, Sami Tilley, and Jasmyn Barton each had a single.

The Birds hosted North Central (12-3, 7-1 BBC), Tuesday, May 3. Down 5- 4 after the fifth inning, the Eagles recorded four runs in the sixth for an 8-5 Buckeye Border Conference victory.

Kaija Blosser hits a single and advances the runner to second base in the third inning against North Central. The Eagles won the BBC contest.– photo by Mary Huber

Behnfeldt was the losing pitcher. In seven innings she allowed eight runs on nine hits, struck out three, and walked three.

The Birds had 10 hits. Blosser had two doubles, while Klopfenstein had two singles and a double.

Both teams had nine hits. Blosser led PHS with three singles, while Behnfeldt had two. Klopfenstein, Tilley, Barton, and Flory each had one single.

Behnfeldt recorded the win. In seven innings she allowed four runs on nine hits, struck out five, and walked two.

Blosser singled in Klopfenstein in the third inning for the only run in Pettisville’s non-league game with Patrick Henry (12-7), Friday, May 6, at Pettisville.