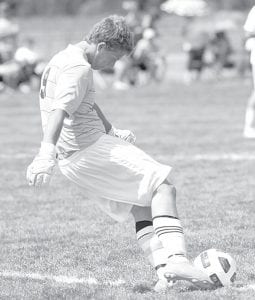 The Pettisville soccer team dropped a 2-1 final to Rossford in the season opener for both teams, Monday, Aug. 20, at Pettisville.

With about 10 minutes left, Josh Liechty, a PHS sophomore, scored for the 2- 1 final.

The Birds were on the road to Cardinal Stritch, Thursday, Aug. 23, and came home with a 3-1 victory.

Pettisville goals were scored by Dan Sauder, Jacob Roth, and Liechty. The Birds had nine shots on goal while Stritch had two.

Pettisville goalkeeper Alex Roth had one save; the Stritch goalkeeper had six.