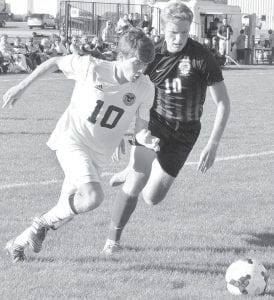 Connor Wyse (10) races a Cardinal to the ball in the Div. III sectional semifinals.– photo by Mario Gomez

The Pettisville boys soccer team (14-2-2) won its first sectional championship in school history with a 3-2 overtime victory over Lake, Saturday, Oct. 21, in a Division III sectional final at Lake.

Pettisville scored in the second minute of the match on an unassisted goal by Detric Yoder.

Lake (14-4-0) tied the score with a goal by Emilio Ignat in the 19th minute on a ricochet off a defender’s body.

Yoder followed up his first goal with a header on a set piece assisted by Connor Wyse in the 20th minute of the first half to take a 2-1 lead at the half.

Lake scored a goal in the 30th minute of the second half to tie the game at 2.

In overtime, Wyse scored on a penalty kick to win the game.

It was the Birds’ 14th straight game without a loss. The only contest in that stretch who they didn’t beat, which dates back to Aug. 29, was a 2-2 tie with Ottawa Hills, who was their district semifinal opponent last night, Tuesday, at Rossford. 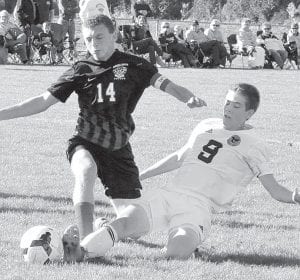 Detric Yoder (9) traps the ball with his foot in Pettisville’s sectional semifinal with the Cardinals.– photo by Mario Gomez

The Birds scored two goals early and took a 3-0 lead into halftime.

Pettisville scored two more goals early in the second half and capped off the victory with a late goal.

Wyse had two assists; Yoder had one.