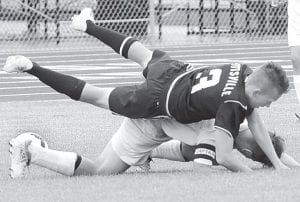 Pettisville scored early in the third minute with a goal from Eli Grieser. The Blackbirds then found it difficult to score with some missed opportunities, and didn’t score again until the 21st minute.

Pettisville finished with more than 70% of the possession in the game and 20 shots on goal.

Yoder had two assists. Connor Wyse, St. John, and Grieser each had one.

Pettisville controlled the midfield for much of the first half and scored first to take a 1-0 lead into halftime.

The Green Bears pressured the Pettisville defense for much of the second half.

The Green Bears (13-0- 2) scored two unanswered goals in the second half, but Pettisville (10-2-2) responded with a game-tying goal in the final minutes.

Yoder scored both PHS goals with assists from Wyse and Landon Roth.