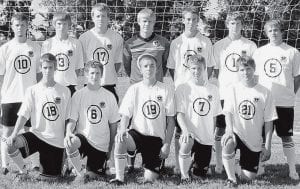 The Pettisville soccer team opened its season with a Monday, Aug. 18 home match against Rossford.

Pettisville scored two goals in the first half and three in the second half for a 5-0 victory.

Next on Pettisville’s schedule were the Continental Pirates, Thursday, Aug. 21. Pettisville scored on a penalty kick in the second half for a 1-0 victory.

Pettisville started the scoring early with a through ball to Quinn Nofziger from Zane Miller when Nofziger dribbled around the goalkeeper to score.

Miller scored next off a long shot that skipped over the diving keeper. Pettisville led 2-0 at the half.

Phillip Roth resumed the scoring in the second half with a long shot from the right wing over the outstretched arms of the goalie.

Jared Avina headed the ball to Nofziger, who blasted the ball past the keeper.

Gonzalo Hernandez ended the rout with a header to the right of the goalie into the net.

Pettisville and Continental met in a very physical game that produced no goals in the first half.

Early in the second half Nofziger got taken down inside the box. That produced a penalty kick, which Nofziger put into the bottom left corner of the net past the diving goalie.