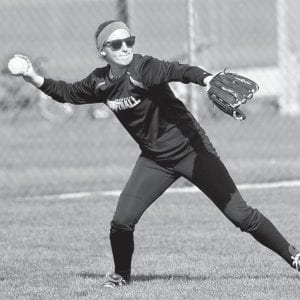 The Pettisville softball team finished its regular season with a 14-0 shutout at Fayette, Wednesday, May 11, to finish the Buckeye Border Conference season with a 6-4 record.

The Birds traveled to Fairview, Thursday and Friday, May 12-13, for the Division IV sectional finals.

With the scoreless game suspended in the third inning due to the weather, the contest resumed on Friday. The Apaches scored six runs in the fifth inning and went on to win 6-2.

Pettisville ends its season with a 10-8 record.

“This was a fun group of girls to coach this season,” said Kendra Stahl, AHS head coach.

“Many of them improved tremendously from the first practice until the end of this season. I was proud of this team.

“These seniors were a great group to see grow and develop over the last four seasons. They were competitive, but also made the game fun to play.

“Their leadership and dedication to the program will be missed.”

The Birds exploded for seven runs in the first inning, added three in the third and four in the fifth for the five-inning BBC victory over the Eagles (0-11, 0-9 BBC).

Kyra Behnfeldt allowed no runs on one hit, struck out four, and walked none in four innings.

Pettisville had nine hits, led by Sydney Purtee’s triple. Kaija Blosser and Andrea Flory each had a double, while Brittney Sauder had two singles.

Amber Klopfenstein, Behnfeldt, Marissa Beck, and Jaelyn Rufneacht each had a single.

Behnfeldt was the losing pitcher. In six innings she allowed six runs on eight hits, struck out six, and walked three.

Pettisville finished with six hits. Sami Tilley had two singles, while Klopfenstein had a double and two runs batted in. Behnfeldt, Flory, and Blosser each had a single.