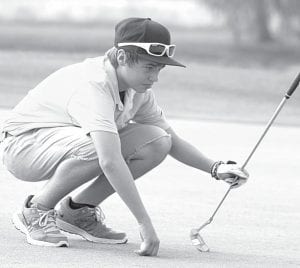 Ottoville won the tournament with a score of 313. Kalida was second with 315, and Wayne Trace was third with 331.

Individual Pettisville scores were not available.

Angela Austin participated in the Div. II girls sectional tournament at White Pines Golf Course, Swanton. She shot a 119, but did not advance to districts.

Ty Herschberger was low man for PHS with a 44. Matt Krill shot a 48, while Reed Behnfeldt and Greg Kempf each shot a 61.

Evan King shot a 48 but was disqualified for a scorecard error.

Holgate’s Landon Grim was match medalist with a 39.