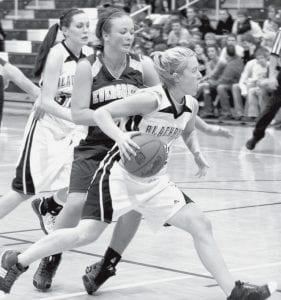 Alexa Short passes a Viking and drives to the basket. She scored 15 points in Pettisville’s 50-45 non-league victory over Evergreen, Monday, Dec. 8.- photo by Mary Huber

The Pettisville Blackbirds knocked off previously undefeated Evergreen 50-45, Monday, Dec. 8 to keep their record perfect at 4-0.

The win over the Vikings “was a nice win for us,” said Jason Waldvogel, PHS coach. “We had some people really come through for us tonight.

The Birds led 24-20 at halftime and widened the difference to 35-25 at the midway point of the third period. The Vikings outscored PHS 6-2 in the final four minutes to close the gap to six, 37-31, going into the final eight minutes.

Evergreen’s Taylor Langenderfer hit a traditional three with 6:31 left to close the gap to 41-36.

After Erica King hit one of two foul shots for PHS, Megan Schwyn scored for EHS off the fast break. King hit another foul shot for PHS, and Lauren Langenderfer hit both free throws for the Vikings to close the score to two points, 42-40.

That was the closest Evergreen would get, as the Birds outscored the Vikes 8-3 in the final five minutes for the win.

King led all scorers with 21 points. Also in double figures for PHS were Short with 15 and Nofziger with 10. Short hit five of the team’s nine treys.

The score was deadlocked at 12 after one and 26-23 at halftime. Pettisville outscored Edon 35-24 in the second half for the 14-point margin of victory.

“We didn’t play with a ton of defensive intensity the first three quarters, but picked it up in the fourth,” said Waldvogel.

Nofziger led all scorers with 19 points. King had 16.