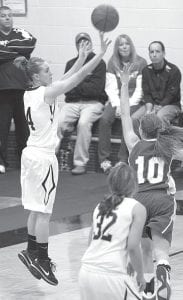 Katie Yoder (4) sinks a three-pointer just before the buzzer sounds at the end of the first period in Pettisville’s game with Edon.– photo by Mary Huber

The loss dropped Pettisville to 11-6, 6-2 in the Buckeye Border Conference.

Edon, which handed the Birds both of their BBC losses this season, raised its record to 10-6, 6-2 BBC.

“We never really got into the tempo of the game,” said Jason Waldvogel, PHS head coach. “Give Edon credit. They played well.”

Stryker is now in the driver’s seat for the BBC title.

With the Panthers’ victory over Fayette on Thursday night, Stryker is in sole possession of the league lead with a 7-1 record and controls its own destiny in winning a solo league championship.

The Blue Bombers led 17- 7 when Katie Yoder hit a three-pointer just before the buzzer to end the first period, closing the gap to 17-10.

Pettisville came within two, 18-16, with a Yoder steal and fast break layup with 3:34 left in the second.

Robert Swary, Edon head coach, called a time-out to settle his team. The Bombers built the lead back up to six, 22-16, after the huddle.

A Kaitlin Nofziger bucket was answered by a deuce from Edon’s Barbara Hug. Tanner Hostetler hit at the buzzer for PHS and the Birds went into the locker room down by four, 24-20.

But during that eight-minute span, Pettisville scored only seven points: a threepointer by Lauren Frey and two buckets from Nofziger.

Kayla King scored off an offensive rebound for Pettisville, and the difference was back to three, 37-34, with 58 seconds left.

Pettisville was forced to foul. Sydney Stoll hit the front end of a one-and one, and Hug hit two, giving Edon a six-point cushion, 40-34.

Hostetler hit the game’s final point, a foul shot with 6.7 seconds left for the 40-35 final.

Nofziger led the Birds with 12 points. Yoder was also in double figures, with 10.