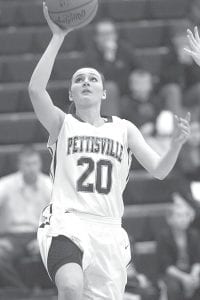 Dana Fricke keeps her eyes on the basket and drives the baseline for two of her 13 points against North Central, Friday, Dec. 7. The Birds won the contest, giving Jason Waldvogel, PHS head coach, his 200th career victory.– photo by Mary Huber

“The 200th victory is really a reflection of where our program has been for the last decade because of the hard work from our dedicated coaches and players,” said Waldvogel.

It was Pettisville’s second win of the week. The Birds hosted Evergreen, Monday, Dec. 3, and defeated the Vikings 39-29 in the nonleague contest.

The Vikings closed the difference to seven, 29-22, after three, but Pettisville won the fourth quarter 10-7 for the 10-point victory.

Dana Fricke led all scorers with 19 points. Mikala Avina was also in double figures for PHS, with 11.

“It was a nice win for us tonight,” said Waldvogel. “Audra Klopfenstein and Jordyn Pursel did a great job on their defensive assignments tonight.

“Dana Fricke stepped up on the offensive side also. I was very proud of the way our ladies controlled the game, especially in the fourth quarter.”

The Birds grabbed 18 rebounds to Evergreen’s four, and committed seven turnovers to the Vikings’ 11.

The Birds led 2-0 with only four seconds gone after Avina drove for a layup.

Fricke scored off an offensive rebound, followed by a pair of free throws and a three-pointer, and all of a sudden the Birds were up 9-0 with 5:34 left in the first period.

North Central finally scored its first point as Bralyn Wyrick made one of two free throws.

Pursel and Avina scored Pettisville’s last two baskets of the quarter, and the Birds led 13-4 after one.

The unbalanced scoring continued in the second quarter. PHS outscored the Eagles 13-2 and took a 26- 6 lead into the locker room. Fricke had 11 of the Birds’ 26 first-half points.

A trio of Blackbirds were in double figures, led by Lauren Hostetler with 16 points. Avina and Fricke each finished with 13.

Wyrick led the Eagles with nine.

“We did a very good job defensively, especially in the first half, taking their scorers out of the game,” said Waldvogel.

“Our offense was balanced tonight with different people stepping up at different times of the game.”