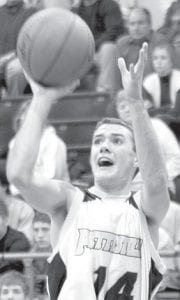 Jacob Rupp shoots in a contest with Edon. He led the Birds with 26 points in their non-league loss to Ottawa Hills.– photo by Mary Huber

Pettisville dropped to 3-3 on the season.

Neither team found an offensive rhythm at the beginning, and Ottawa Hills led 6-4 at the end of one.

The second quarter proved to be the difference. Several Birds got into foul trouble, and PHS was outscored 21- 13 to go into the locker room facing a 27-17 deficit.

Pettisville came out of the locker room and outscored the Green Bears 13-11 to cut the gap to eight, 38-30.

The Birds cut the difference to two late in the fourth quarter, but were unable to tie the score. Ottawa Hills hit enough free throws to hold on for the victory.