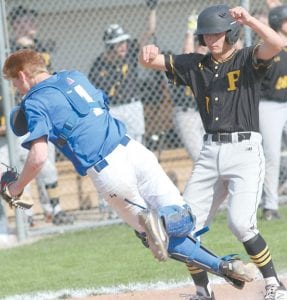 Pettisville’s Josh Horning knocks over Stryker catcher Thomas Bost to score a run in the third inning of their Div. IV sectional semifinal, Tuesday, May 14. The Birds won the semifinal 6-5, but lost 14-0 to Antwerp in the sectional final.– photo by Mary Huber

The Birds traveled to Stryker (10-10) to open the sectional tournament, Tuesday, May 15.

PHS opened the scoring when Josh Horning scored from second base in the first inning.

Tommy McWatters’ base hit to right field in the third inning brought home Horning and Logan Rufenacht for a 3-0 lead, but the Panthers tied the score with three runs in the bottom of the inning.

Stryker took a 5-3 lead with two runs in the fourth.

Pettisville cut the difference to 5-4 with a run in the fifth as Rufenacht crossed the plate.

The Birds then shocked the Panthers’ faithful by scoring twice in the sixth for a 6-5 advantage.

Brayden Barrett started the inning with a base hit to left field. Josh Norr’s sacrifice bunt advanced Barrett to second.

Rufenacht hit a single to center field, and Devin Beltz’s fly ball to center field was dropped, allowing Myers to score what proved to be the winning run.

Stryker left men on base in both the bottom of the sixth and seventh innings, giving PHS the win.

Rufenacht pitched a complete game. In seven innings he allowed five runs on eight hits, struck out three, and walked one.

The Birds had nine hits. Rufeancht had a double and two singles. McWatters had two singles with two runs batted in. Barrett had a pair of singles; Myers, a single with an RBI; and Horning, a single.

Top-seeded Antwerp improved to 15-5 with a 14-0 no-hit shutout of Pettisville, Thursday, May 16, in a Div. IV sectional final at Antwerp.

J. Horning was the losing pitcher. In 2/3 inning he allowed four runs on four hits, struck out one, and walked none.

J. Horning was the winning pitcher. In five innings he allowed no runs on three hits, struck out seven, and walked one.

Rufenacht had a double, single, and an RBI. J. Horning had a single with an RBI; Myers, a single; Nate Keim, double, RBI; and Nate Rupp, a single.