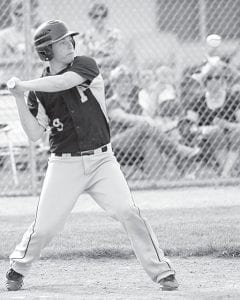 Alex Roth, shown against Hilltop on May 2, went 2-3 with a double and an RBI in Pettisville’s BBC win over Stryker, Monday, May 6. Roth was also the winning pitcher in the game, as well as the Birds’ Division IV sectional semifinal victory over Continental, Saturday, May 11.– photo by Mary Huber

The Pettisville baseball team (9-8) picked up a 9-3 win over Continental in Division IV sectional semifinal action, Saturday, May 11, at Napoleon.

The Birds were scheduled to play Tinora (11-6) yesterday, Tuesday, in the sectional final. The winner advances to the district semifinals, Wednesday, May 22, 4:15 pm, at Bryan.

Against Continental, the Birds pounded out 11 hits. Jacob Deffely led the way, going 3-3 with a pair of singles, a double, and a run batted in.

Logan Nofziger had a single, triple, and three RBIs; Tate Kauffman and Cam Norris, a single and a double each; Tanner Rufenacht, a double with two RBIs; and Noah Miller, a single.

The Birds led early, scoring two runs in the second inning. They built a 4-0 lead after scoring two more in fifth.

The Pirates, who finished the game with six hits, closed the gap to 4-3 with three runs in the top of the sixth, but PHS put the game out of reach with five runs in its half of the inning.

Alex Roth recorded the win. Pitching a complete game he gave up three runs on six hits, struck out five, and walked four.

Miller gave up just one hit in recording the win. He gave up one run, struck out eight and walked none in four innings.

Miller, Norris and Rufenacht all singled, accounting for the Birds’ three hits.

Pettisville recorded a 7-4 BBC win over Stryker, Monday, May 6, at Stryker.

The Panthers tied the score with a run in the seventh.

The Birds scored three runs in the ninth to record the win.

Roth picked up the win. In five innings he gave up no runs on two hits, struck out three, and walked three.

The Birds were scheduled to play Edon, Monday, May 13, in Pettisville’s league fi- nale.

A win would give PHS a share of the BBC title with North Central, which finished its league season with an 8-2 record.

An Edon win would give the Blue Bombers a shot at sharing the league title with two BBC games to go.