PHS Class of 2013 To Be Successful, Stay In Touch 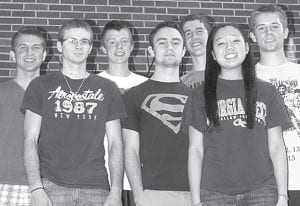 There will be success stories that will come out of the Pettisville High School Class of 2013, class members said in a recent interview.

“They’re all pretty high. They’re pretty competitive. Throughout the whole class, it’s like that,” he said.

Hannah Tilley, class secretary, said, “Our class is crazy. There are so many supersmart people. We’re going to have some success stories.”

But even though class members are competitive, they still support one another, said Tanner Rufenacht, class president.

“Hannah is the only girl in our physics class, and we don’t pick on her… too much,” Rufenacht said.

Pettisville, being a relatively small school district, will have a small graduating class, at 50 students.

Timothy Iott, class treasurer, said everyone knows everyone; they also know the names of everybody in the high school, and even down to eighth grade.

Tyler Burkholder, class vice president, said they also know a lot of the kids in the elementary school.

With all grades in one school building, high school students interact with those in the elementary grades, giving the young students a chance to connect to the older ones, Rufenacht said.

“Hopefully, they look up to us and learn from what we do,” Rufenacht said.

In general, the seniors said they all get along well.

Roth said class members may hang out together as small groups, but the membership of the groups may change, and some groups will interact with others.

Matt Storrer, a member of student council, said, “Even the people you don’t talk to, you talk to.”

Like just about every class, news about each other travels fast.

“Our lockers are in like a 30- to 40-foot space, and we’re all there between every class,” Roth said.

“As soon as we’re in the hallway, everyone knows,” Liechty said.

“The whole high school can know within a half-hour,” Burkholder said.

In fact, one said he got a speeding ticket on prom night. Most of the class knew before he told anyone, because someone saw his car pulled over and sent a text message to everyone.

When asked how many students have cell phones, smart phones, or other similar devices, Tilley said “everybody.”

The seniors all like their two-year-old school building. On a hot day, they particularly like the air conditioning.

Burkholder said he likes how all the high school classrooms are on the second floor.

“It’s a lot easier to get to class,” Roth said.

Iott said the wide hallways make it easier to move from classroom to classroom.

“There were a lot of clogged hallways in the old school,” he said.

Plus, with additional new technology, there are more things they can do.

Tilley said she particularly likes the “smart boards,” a replacement for the old blackboards. The smart boards can work with computers.

“Those are really cool,” she said.

But yet, they miss the history and tradition of their old building.

“Like how the hand railings were worn down from use,” said Burkholder.

When students have time between classes, they gather in the school atrium.

Liechty said he was jealous of Archbold at first, but now, Pettisville students are bringing their own devices to school, ranging from laptop computers to tablets.

“It’s kind of nice to have your own personal (computer),” Storrer said.

“And I feel safe bringing it to school,” Liechty said.

That’s because Roth said they trust other students, and because the new school is filled with security cameras.

The seniors admitted to being apprehensive about the cameras, but they were used to solve the theft of a digital music player.

The students also didn’t feel school administrators were using them to spy on the students.

“Nobody pays any attention to them anymore,” Tilley said.

And even with the cameras, “I can still get away with goofing off,” Storrer said.

With the days counting down until graduation, the students were thinking about the end of their high school careers.

Roth said one girl was standing in the lunch line, and said after graduation, they will never see each other again.

“Everybody laughed at her,” Roth said, but…

“Most people find their way back, at Christmas, or for basketball games, or hanging out in the summer,” he said.

“We just won’t be coming to school together every day,” he added.

The students believe they will maintain their connections.

“In this day and age, there are so many ways to stay in touch,” Rufenacht said.