PHS Class of 2013 Lauded As Outstanding 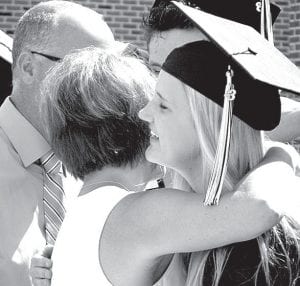 Amber Dykstra, a member of the PHS Class of 2013, accepts the congratulations of Al and Tammy Riegsecker after commencement exercises, Sunday, May 26.– photo by Pam Graber

Forty-seven “outstanding, gifted individuals” were part of the graduating class of Pettisville High School at its May 26, 2013, commencement exercises.

Stephen Switzer, superintendent, thanked the class for “what you’ve meant to the school, for your accomplishments that you have attained yourselves and those you have helped the school to attain.”

He said one graduate said she wanted to be remembered for working hard and being kind.

“I hope that is a message that you will carry from Pettisville High School,” he said.

“If you practice those two elements of working hard and being kind, I think you’ll find success beyond your wildest imaginations.”

First, he cautioned the class to, “embrace your limits and your limitations.”

“You will not be the greatest. You will not succeed at everything. You cannot do whatever you want. But you can make the world a better place. You can make a difference.”

To illustrate his point, he told the story of George Washington Carver, who, by concentrating his scientific studies on the peanut, was able to extract over 300 different products from it.

Engle encouraged the class to “find your peanut. Do what you can to make the world a better place.”

Engle’s second piece of advice was, “be willing to apologize or ask for forgiveness. Doing this is very hard but it’s very powerful.”

He encouraged them to “give and receive forgiveness, move forward as healthy people, making the world a better place.”

Jacob Roth, recipient of the school’s highest honor, the Citizenship Award, was the first class speaker.

He contrasted his class today with the same class back in second grade, when their collective reaction to conflict resulted in a huge fight on the playground.

“No one even remembers the true cause of the fight. As seniors, we can’t even remember the disagreement that was important enough to start a fight,” he said.

“As seniors, we argue all the time, but we are all still friends after we’ve voiced our opinions. Through our years at Pettisville I’ve seen my class learn to accept and embrace each other for who we are.”

Roth also said their experiences at Pettisville have taught his class to give each person and idea a chance.

“It’s taught us to view things from their point of view and to be more thoughtful in the decisions that we make.”

Also representing his class as a speaker was Matthew Storrer.

He said, “Today, before you, sit tomorrow’s teachers, engineers, doctors, lawyers, astronauts, composers, inventors and, most of all, leaders.”

He encouraged his classmates to, “Fight for your dreams. Be different! We can stand out or we can fit in. We were made to excel.”

Jacinta Nafziger, high school guidance counselor, prodded the class to continue to have high standards of both service and scholarship as they enter a new stage in their lives.

She said the class had collectively earned over $680,000 in scholarships, with several class members receiving full rides.

The class logged over 500 hours of volunteer work in their senior year.

She said 81% of the class plans to attend college. More than half of that number received scholarships to further their education.

Of the 47 members of the class, 21 received a plaque signifying that they had maintained a grade point average of 3.3 or above for all four years of high school.

Nafziger thanked the Class of 2013 for living out the school mission, which is, “Pettisville Local School is committed to providing a distinctively superior education that enriches both the students and the community.”