PHS Class Of 2012 Showered With Praise 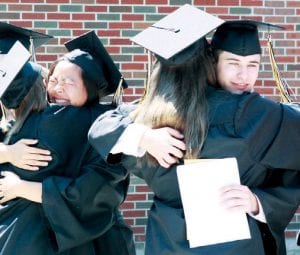 Kelsey Waidelich, left, and Zach Kempf hug fellow graduates after Pettisville High School commencement exercises, Sunday, June 10. The Class of 2012 was the first to graduate from the new school.– photo by Mary Huber

Members of the Pettisville High School Class of 2012 received plenty of praise during their graduation ceremony, Sunday, June 10.

Steve Switzer, Pettisville school district superintendent, thanked them for all they had done for their school over 13 years, for their leadership, “and more importantly, for just being you. You’re a great bunch of kids,” he said.

Rebecca Dorosz, a PHS English teacher and volleyball coach who is herself a PHS graduate, said when she began teaching, members of the Class of 2012 were seventh graders.

She said she was impressed with their abilities. She was convinced that because they had worked so hard for her, there were no students on the planet who were smarter.

Dorosz quoted Dawn Walsh, a third grade teacher who retired this year. Walsh said the Class of 2012 was a hard-working group of students who set high standards for themselves, even in third grade.

Jacinta Nafziger, a PHS counselor, said the class was competitive, but at the same time, supported each other.

Picking up the theme of Travis Beck, one of two class speakers, Nafziger said the class was hard-working, humorous, and happy.

She told class members, “It was a fun time working with all of you.”

The class scored well above the state average on the American College Test, or ACT, and more than half reported receiving scholarships and grants that, over four years, will total about $1 million.

Nafziger said the class had donated over 800 hours of voluntary service, including helping school officials move into the new building and volunteering to help out at Sauder Village “on the coldest, windiest day in April.”

She said they completed their work “willingly and cheerfully.”

Dorosz, who was chosen by the class to give the commencement address, centered her speech on the subject of change.

She pointed out that if change were resisted, messages would still be delivered by a boy on horseback, television would be in black and white, and cell phones would be large and bulky.

She urged class members to be prepared for change.

“Don’t let time pass you by unchanged,” Dorosz said. “Don’t get stuck where you are now and become obsolete. Realize you have the potential to develop your gifts and be ready for change.”

She told the class it was time for them to let go, to find their way, to make a difference in the world.

Tanner Hostetler, who received the Citizenship Award, the highest award bestowed upon a PHS graduating senior, was a class speaker.

In addition to the Citizenship Award, she received the school’s Top Scholar award for a perfect 4.0 grade point average, and was recognized with the Scholarship Award for a 3.3 or higher GPA.

She said the class had achieved high test scores and had successes in several other fields.

“Yet, what really makes our class special is that everyone gets along so well to- gether,” Hostetler said.

“Instead of distancing ourselves because of our differences, we embrace them. I think it is very noble that everyone in our class willingly plays their role, and because of that, we complete each other and bring out the best in each other.”

Hostetler told class members, “No matter where you go, everyone here has special talents and abilities to offer.

“Don’t try to change yourself, or be someone you aren’t. Be yourself and use the gifts you have been given.”

In his speech, Beck, like other speakers, talked about fond memories of the class.

He told his classmates, “As we leave here today, let us not forget one another and all of the fun times we had together.

“We also need to remember the lessons we learned.

“One of the most important lessons is to carry your light-hearted happiness everywhere you go, so that you can always see the good in every situation.

“This will definitely help you when you are trying to make decisions later in life.

“Also, don’t forget to smile daily, because laughter is the best medicine.”

Out of 49 members of the graduating class, 20 received the school’s scholarship award, recognizing a 3.3 or higher grade point average.

In addition to Hostetler, seven other nominees for the Citizenship Award were recognized. They were Ashlyn Bontrager, Lauren Frey, Alexis King, Taylor Kruse, Zach Pursel, Dustin Roth, and Laura Rupp.

But, she said, “You will always be my kids.”