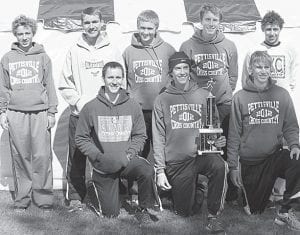 The Pettisville boys team had its first five runners finish in the top 31 to win the Fostoria Booster Cross Country Invitational, Saturday, Oct. 6.

The Birds finished with a team score of 75 points. Hopewell-Loudon took second with 96, and Old Fort was third with 141.

“I was very proud of all our kids’ performance at Fostoria,” said Tom Wagner, PHS head coach.

“Our varsity boys wanted to win real bad for senior Tanner Rufenacht in his last invitational of his high school career. It was a real team effort.

“Our junior high girls won pretty handily in a big field with many large schools. We went one and two with Alexa Leppelmeier and Elizabeth Sauder, and Aaron Bontrager was the overall winner in the junior high boys race.”

Austin Dykstra was the final scoring runner, placing 31st in 18:32.

The PHS girls team finished ninth out of 16 teams with 197 points. Toledo Christian won with 78, followed by Hopewell-Loudon with 103 and Gibsonburg with 139.

Samantha Shinhearl was the first Blackbird to finish. She placed 30th out of 146 runners in 22:44.