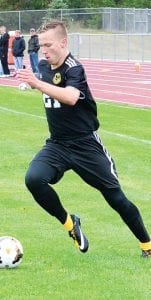 Canidate Vickery dribbles the ball down the field.–photo by Mario Gomez

Pettisville started slow in the first half and had three early injuries, but was able to regroup and improve its play to earn the win.

Recording assists were Landon Roth with two, while Blake Eyer, Mitchell Avina, Grieser, Justin Rupp, and Preston Stevens each had one.

Neither team scored in the first half. Liberty Center (5-2) opened the scoring in the second half on a missed clearance by a Pettisville defender that ricocheted off the Tiger forward, allowing him to get behind the defense for a wide open shot on goal.

Pettisville was nursing injuries to three starters, but with 10 minutes left inserted Wyse into the game for the first time to generate some midfield build.

He quickly broke down two Tiger defenders and threaded a pass to a wide- open Yoder for the game winner.