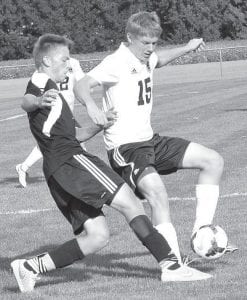 The Pettisville soccer team is 5-6-3 after a win and a loss last week.

The Birds defeated Bryan 2-1, Thursday, Sept. 25, at Pettisville. Andrew Sauder and Josh Liechty scored for PHS; Liechty’s goal was on a penalty kick.

The Birds had six shots on goal to Bryan’s 14.

Pettisville traveled to Napoleon, Saturday, Sept. 27, and came home with a 5-3 loss.

Liechty scored all three PHS goals, and all were on penalty kicks.

The Cats had 12 shots on goal to Pettisville’s four.