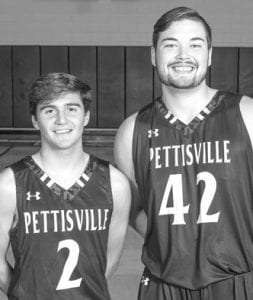 Two letterwinners return to a Pettisville boys basketball team that was the Buckeye Border Conference champion with an 11-1 record last year, and was 18-7 overall.

Brian Leppelmeier is starting his fourth year as head coach of the Birds, where he is 49-22.

“Even with only two returning letterwinners from last season, our new group of players have been very coachable,” said B. Leppelmeier. “Throughout the pre-season, the returners have been good leaders as we progress with this new team.

“We graduated a solid group of seniors that were responsible for over 60% of our offense. Of the seven seniors lost to graduation, four were starters, led by our leading scorer and area assist leader, Detric Yoder.

“Our challenge to begin this season for our newcomers to the varsity level is learning and accepting the new roles for this team.”

The coach predicts the BBC will be balanced and competitive this year.