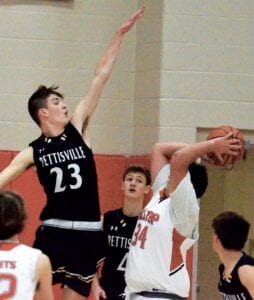 Pettisville opened the 2020-21 boys basketball season with a pair of victories, including a Buckeye Border Conference win.

The Blackbirds opened their defense of their BBC title, Friday, Nov. 27, at Hilltop with a 61-32 win.

“Only having been on the floor twice with all the things we’ve had to deal with, with Covid early on, we were a little concerned how we were going to look defensively,” said Brian Leppelmeier, PHS head coach.

“I thought our guys came out with that effort and that energy, especially when you have a gymnasium where you don’t have that crowd.

“I thought our guys responded to what we challenged them with in the beginning to play really hard.”

Pettisville used its inside game and took control from the start to grab a 14-6 firstquarter lead. 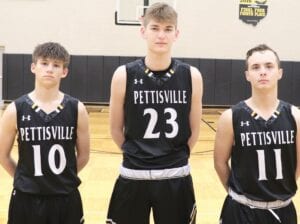 Cayden Jacoby was the workhorse in the game, scoring 15 of his game-high 33 points in the second quarter to help the Birds lead 36-12 at the half.

The second half was much of the same, as a heaping helping of Jacoby was served to the Cadets.

The sophomore center scored nine of Pettisville’s 15 third-quarter points to push the difference to 34, 51-17.

Leppelmeier gave his starters a rest in the final stanza, turning to his reserves to finish the contest.

“We thought we were gonna see some zone (defense) out of Hilltop,” said Leppelmeier.

“I thought our guys did a good job of moving the basketball early on and finding Cayden inside.

“When you open up with a league game you need to be ready to go. It’s one of those things where you can be out of the race before Christmas.”

Jacoby had a double-double with 33 points and 13 rebounds. Joey Ripke added 10 points.

The Birds won the rebounding battle, 29-10, and committed only 10 turnovers to the Cadets’ 20.

After a tight first half with Delta, Pettisville used a strong second half to pull away for a 39-25 non-league win in the Bird Cage.

Pettisville led 12-5 after one but scored just three points in the second while the Panthers pulled to within a point at the half, 15-14.

Max Leppelmeier and Jacoby scored a combined 17 points in the second half and Pettisville outscored Delta 24-11 in the final two quarters to propel the Birds to the 39-25 win.

Jacoby had another double double with 17 points and 11 rebounds.

Leppelmeier was also in double figures, with 11 points.