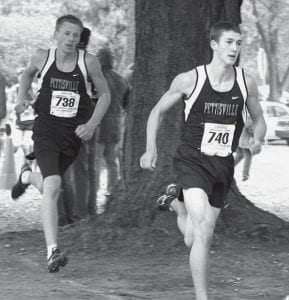 Tom Wagner, Pettisville cross country coach, asked his team to run their best at the Division III regional meet, Saturday, Oct. 27, so they might have a chance to be one of the four teams that would advance to state competition.

The team surprised their coach by not only advancing, but winning outright the regional championship crown.

PHS runners outscored the other 16 teams with a combined score of 119 points.

In cross country, the place of each runner on a team counts as one point. The scores of the top five runners are combined for a team total.

Teams with the lowest scores are the winners.

“The boys really worked as a team,” Wagner said. “They didn’t worry about who would be first or second on the team. They really showed what teamwork is all about.”

Junior Austin Borton and senior Alex Frey both placed in the top 16 out of 129 runners in the race. The top 16 runners advance to state regardless of team placement. 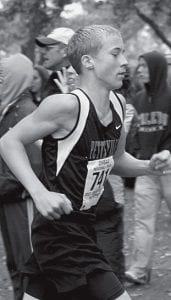 Lincoln Frey was third across the finish line for the Pettisville boys team at the regional meet. He placed 24th.- photo by Mike Nafziger

Next for the Blackbirds was another sophomore, Jacob Nofziger, who finished 48th in 17:35.

Nofziger, who also plays soccer, was not able to run at the district meet because of a conflicting soccer game.

The last scoring runner for Pettisville was Brandon Hamilton, also a sophomore. He finished 65th in 17:54.

This is the first regional cross country championship for Pettisville, and the first time an entire Pettisville team has qualified for state since 1983.

The 1983 girls cross country team placed third at state after a second-place finish at regional.

In 1981, the boys team advanced to state in Class A with a fourth-place finish at regional. They were eighth at state.

Wagner, current PHS head coach, was the assistant coach to Phil Rychener in 1981 and the head coach in 1983. He has served as a coach for Pettisville cross country for 27 years, 26 as head coach.

Marty Rupp, a current assistant coach, was on the 1981 boys team.

Pettisville competes against the best 16 teams in Div. III at the state meet, Saturday, Nov. 3.

The race is scheduled to begin at 1:20 p.m. at the Scioto Downs race track in Columbus, where fans can watch both the first half-mile and the last halfmile from the stadium seats.- D.J. Neuenschwander