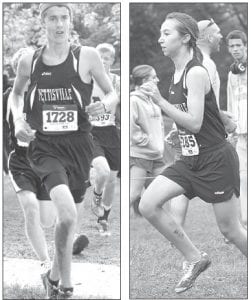 Tanner Rufenacht, left, was the second Pettisville runner across the finish line in the boys race at the Tiffin Carnival while Grace Friend, right, was the second Blackbird to finish in the girls race.– photos by Jack Frey

The Pettisville boys cross country team finished 12th out of 39 teams in the Boys Division III-A race at the Tiffin Carnival, Saturday, Sept. 8.

There were 271 total runners in the race.

The Birds finished with 437 points. Cortland Maplewood won with 126, while Seneca East placed second with 167. Minster was third with 196.

Dominic Frey was the first Blackbird across the finish line. He placed 41st in 17 minutes, 22 seconds.

There were 334 runners in the race.

Samantha Shinhearl was the first Bird to cross the finish line. She placed 213th in 24:38.

Two PHS girls ran in the Girls Div. III Open, which had 312 runners.