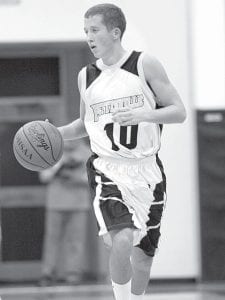 Taylor Short brings the ball up the court for the Blackbirds. The senior led PHS with 11 points in their loss to Edon, Thursday, Dec. 16.–photo by Mary Huber

The Pettisville boys basketball team dropped to 1-3, 0-2 in the Buckeye Border Conference with a 57-48 loss to Edon, Thursday, Dec. 16.

The score was tied at 13 after one period, but Edon outscored the Birds 20-16 in the second to take a 33-29 advantage into halftime.

Pettisville closed the difference to two, 41-39, after three. The Blue Bombers won the fourth quarter 13-9 for the nine-point margin of victory.

Ryan Wells led Edon with 16 points. Also in double figures were Zach Hug with 15 and Brien Moore with 10.