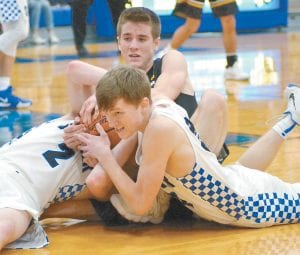 Pettisville needed to play some extra basketball, Thursday, Jan. 17, at Stryker, but came home with a big 66-63 win in double overtime to pull even at 7-1 with the Panthers in the Buckeye Border Conference.

“I told them afterwards we had it won three times and had it lost three times.”

Trailing 25-20, Logan Boetz went coast to coast as the clock ran down and scored on a layup to give Stryker the momentum and send the Panthers to the locker room down by three, 25-22.

With the score tied at 27 early in the third, Logan Rufenacht scored the next five points and Graeme Jacoby added a pair of free throws to lead 34-27.

Pettisville held a slight 7- 5 scoring advantage over the final four minutes of the period to take a 41-32 advantage into the fourth.

Stryker opened the final eight minutes of regulation with a 9-3 run to pull within three, 44-41, with five minutes left.

Jacoby and Yoder scored the next four points for the Birds, but Boetz scored seven straight points in a span of 36 seconds to tie the game at 48.

After a Pettisville timeout, Sam Rychener scored to put PHS up 50-48.

Stryker trailed by a point after a Chase Glock free throw.

The Panthers fouled Yoder on the ensuing play to send the senior to the foul line with 13.6 seconds remaining.

Yoder calmly drained both free throws for a 52-49 lead.

Stryker missed on its next possession and was forced to foul again, sending Rychener to the line.

With a chance to ice the game, Rychener missed the front end of a one-and-one.

Stryker grabbed the rebound and got the ball to Boetz, who took a shot from 23 feet that hit nothing but net as time expired to tie the game at 52 and send the game into overtime.

“I thought there was a couple times we should have handled the basketball a little bit better,” said Leppelmeier.

“You’ve got to give Stryker credit. They hit clutch shots down at the end.”

In the first four-minute overtime, Stryker took its first lead of the game on a Glock free throw.

Pettisville answered with a Yoder layup.

Boetz was the difference again, scoring on a layup with nine seconds left to tie the game at 57 and send it into a second overtime.

Boetz had a chance to tie the game again, but his three-point attempt fell short, and the Birds ran the clock out to win 66-63.

“I didn’t think we gave them too many second opportunities,” said Leppelmeier. “I think in the first game that was the difference down the stretch.

“We had some turnovers that you’d think a guy would hang his head, but we didn’t. Our guys brushed that off, cleared their minds and moved on to the next play.”

Yoder led Pettisville with 21 points, including 11-13 at the charity stripe.

Boetz led all scorers with 25 points, while Glock contributed 23 for the Panthers.

Rychener just missed out on a double-double, grabbing 21 of Pettisville’s 33 rebounds and scoring nine points.