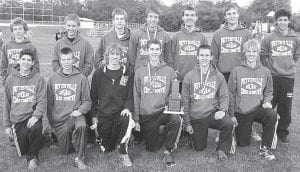 The Pettisville boys cross country team is the Buckeye Border Conference champion for the second straight year after winning all three BBC Jamborees this season.

Fayette finished as runners up, and Stryker was third.

Fayette was the BBC girls champion, winning two of the three Jamborees. Hilltop was second, followed by Stryker in third place and Pettisville in fourth.

Hilltop won the third Jamboree with 48 points, one point less than Fayette. Pettisville was fifth.

“I’m very proud of all of the kids and their efforts,” said Tom Wagner, PHS head coach.

“The boys have really bonded as a team in both practices and competition. That’s something that you really can’t coach.

“We’ve had tremendous leadership from Tanner Rufenacht, and support from our juniors as well. All their hard work and dedication is showing.”

Frey won the race in 17 minutes, one second, the same time as he ran in the second Jamboree when he placed second.

Samantha Shinhearl was the first PHS runner to finish. She placed 11th in 22:46.

The top four teams in each race, along with any individual who finishes in the top 16, advance to the regional meet, Saturday, Oct. 27, at Tiffin.