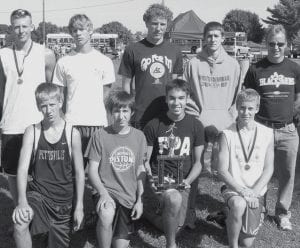 The Pettisville boys cross country team finished first and the girls were third at the second Buckeye Border Conference Jamboree of the year, Thursday, Sept. 27, at North Central.

The PHS boys also came out on top at the Edgerton Invitational, Saturday, Sept. 29.

The second of the three BBC meets that will determine the league champion was held Thursday.

In the boys race, the Blackbirds claimed first place with a 21-point margin over second-place Hilltop.

In the girls race, Pettisville placed third, with North Central winning on their home course and Fayette finished second.

Hannah Beck beat two teammates to the line in 24:20 to claim 19th and finished the scoring for the Birds.

Tom Wagner, PHS coach, said all the runners did a nice job.

“The boys really benefited from adding Jacob Nofziger, who also plays on the soccer team,” he said. “He ran a really good race and helped us claim first place in this important meet.”

Sixteen schools were represented at the Edgerton Invitational. The PHS boys won by one point over Stryker; the girls finished sixth.

Borton led the Birds for the first time this season, running a fast 16:38 over the 5-kilometer distance to claim third overall. Edgerton’s Jordan Karnes won in 16:27.

The Blackbirds compete in the final BBC Jamboree, Thursday, Oct. 4 at the Edon Park.