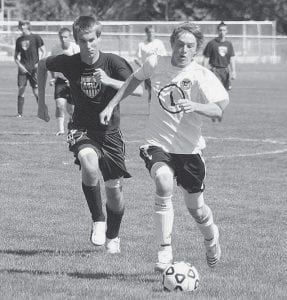 The Blackbirds traveled to Kalida for a matchup with the fourth-ranked Division III Wildcats, Friday Sept. 12. In a rainy and muddy game, Pettisville played to a scoreless tie at halftime, but the Wildcats showed why they are ranked so high, winning 4-0.

Pettisville is 6-2 on the season.

Waite and Pettisville played the first half even, with each scoring a goal. The PHS goal was scored when Quinn Nofziger crossed the ball to Jordan Klopfenstein, who headed the ball into the back of the net.

The Waite goal was scored when a cross was punched into the net.

Pettisville broke the match open with a goal from Phillip Roth into the left side of the net. Taylor Short scored next as he tapped in a deflection off a Clay Norris shot.

Jeremy Rupp ended the scoring as he finished a rebound from an Isaac King shot.

Pettisville had few opportunities in the first half, as they played defense most of the time. The Birds held off the attacking Wildcats with numerous clears, keeper saves, and one shot bouncing off the crossbar.

The Wildcats finally broke through in the second half as a soggy Wildcat finished a cross by a sliding Pettisville keeper.

Kalida came right back with a shot that was bent into the top left corner of the goal.

The next Wildcat goal came off a laser into the top right corner just past the outstretched arms of the diving goalie.

Kalida’s final goal was scored when a corner kick was knocked around in front of the goal and finally finished into the bottom left of the net.