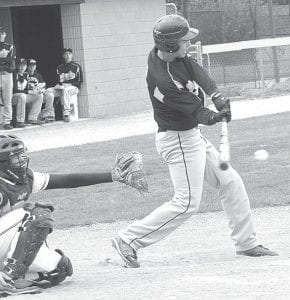 Zach Pursel hits an infield base hit in the second inning of Pettisville’s non-league contest with Archbold, Wednesday, April 11. With the score tied at 2, the Birds scored the winning run in the seventh inning for a 3-2 victory.– photo by Mario Gomez

The Pettisville baseball team had a full week of action last week, winning two and losing two to support a 5-7 record, 2-2 in the Buckeye Border Conference.

The Blackbirds garnered wins over Hilltop and Archbold but lost to Stryker and Holgate. PHS 13, Hilltop 9

The Birds hosted the Cadets, Monday, April 9 and picked up their second BBC win of the season, topping the Cadets 13-9.

Noah Miller picked up the win on the mound. In three innings he gave up no runs on one hit, struck out one, and walked three. Alex Roth and Jacob Roth each pitched two innings.

Hilltop took a 5-0 lead after one inning and extended it to 7-0 at the top of the second.

The Birds bounced right back, scoring three runs in their half of the second, adding two in the third, and four in the fourth for a 9-7 advantage. 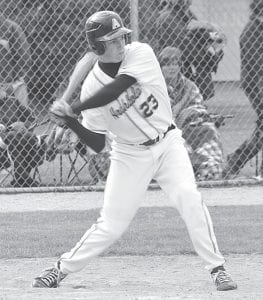 Chandler Tuckerman at bat for the Blue Streaks in their game at Pettisville.– photo by Mario Gomez

PHS widened the lead to 12-7 after five. The Cadets added two in the top of the sixth, but Pettisville crossed the plate one more time in the bottom of the inning for the 13-9 final. PHS 3, Archbold 2

Pettisville crossed the plate first in the bottom half of the third.

Archbold took a 2-1 lead in the sixth with two runs.

Pettisville tied the game at 2 with one run in the sixth and scored the winning run in the seventh.

Michael Walker suffered the loss for Archbold. In 2 1/3 innings he gave up two earned runs on four hits, struck out two, and walked one.

At the plate for PHS, Pursel went 2-3; J. Roth hit a double; and Beck and A. Roth each had RBI singles.

Pettisville traveled to Stryker, Thursday, April 12 and suffered its second BBC loss of the season.

The Birds let a 5-2 lead slip away when the Panthers crossed the plate five times in the fifth for a 7-5 lead.

Pettisville added a run in the sixth but was held scoreless in the seventh for the 7-6 final.

A. Roth suffered the loss on the mound. In 4 1/3 innings he gave up six runs (four earned) on five hits, struck out one, and walked five.

Hosting the Tigers, Friday, April 13, Pettisville’s luck was not good as the Birds suffered a 7-3 loss.

The Tigers blasted out 12 hits while PHS totaled four.

L. Nofziger went 2-4 with a double and two RBIs. Dustin Nofziger had an RBI single.

Norris suffered the loss. In 2 2/3 innings he gave up four earned runs on six hits with two walks.

After a scoreless first inning the Tigers crossed the plate in the second for a 1- 0 lead. Holgate added three runs in the third before Pettisville crossed the plate twice in the bottom of the inning for a 4-2 Tiger advantage.

Pettisville crossed the plate once more, in the bottom of the fifth, while the Tigers added single runs in the fourth, sixth and seventh for the 7-3 final.