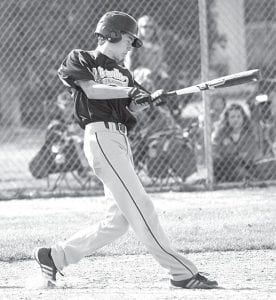 The Pettisville baseball team dropped to 3-5, 1-1 in the Buckeye Border Conference last week.

The Birds hosted Edon and defeated the Blue Bombers 4-2 for their first Buckeye Border Conference win of the year.

Taking to the road for three games at the end of the week, the Birds fell to North Central in BBC action and lost a doubleheader to Evergreen.

The score was tied at 1 after the first two innings. Pettisville scored three times in the bottom of the fifth for a 4-1 lead. Edon scored its fi- nal run in the sixth.

Alex Roth was the winning pitcher. In seven innings he allowed two runs (one earned) on six hits, struck out six, and walked four.

The Birds had seven hits. Roth was 2-3 with a double; Tanner Rufenacht was 2- 4; Cam Norris, Jacob Roth, and Zach Pursel each had singles. Norris also had two runs batted in.

Pettisville traveled to North Central, Thursday, April 5. The Birds crossed the plate twice in the top of the first inning, but it wasn’t enough as the Blackbirds lost 6-2.

North Central matched Pettisville’s two runs in their half of the first, and after two scoreless innings added four runs in the fourth to register the win.

Norris suffered the loss, giving up five earned runs on two hits, striking out two and walking six in 3 2/3 innings.

Pettisville had three hits: a double by Aaron Bruner and a pair of singles from Pursel and J. Roth.

Pettisville traveled to Evergreen, Saturday, April 7 for a doubleheader and suffered 15-2 and 9-1 losses.

Evergreen blasted out 12 hits in the first game while the Birds crossed the plate just two times while scattering seven hits.

Leading hitters for the Birds were Tate Kauffman, 2-3; Pursel, a double; A. Roth, Norris, Rufenacht and Eli King, each with singles.

Pursel recorded the loss. In 2/3 of an inning he gave up seven runs (two earned) on four hits and walked one.

In the second game Pettisville fared no better as Evergreen recorded 10 hits.

The Vikings led 6-0 after the first two innings. Pettisville scored its only run in the third, while Evergreen scored a single run in the fifth and two in the sixth.