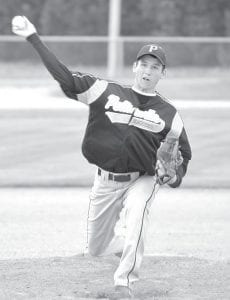 Travis Beck fires off a pitch. The senior was on the mound when the Birds lost a 5-4 non-league contest to Montpelier in eight innings last week.– photo by Mario Gomez

With a full week of baseball behind it, the Pettisville baseball team dropped to 6- 10, 3-3 in the Buckeye Border Conference.

The Blackbirds picked up a BBC win over Fayette, but lost a league game to Edon and non-league games to Montpelier and Tinora. PHS 9, Fayette 4

Pettisville climbed to 3-2 in the BBC with a 9-4 win over the visiting Eagles, Monday April 16.

Fayette struck first, scoring twice in the top of the first inning. The Eagles held the Blackbirds scoreless through three.

PHS took the lead in the bottom of the fourth with four runs, and added two in the fifth and three in the sixth for its total of nine.

Fayette scored one run in the sixth and one in the seventh.

Daniel McNamara was the losing pitcher. In 5 1/3 innings he allowed six runs on three hits, struck out four, and walked seven.

Fayette scattered eight hits while Pettisville came up with just four. Jacob Roth was 1-2 for the Birds with two runs batted in. Aaron Bruner was 2-3 with two RBIs, and Tanner Rufenacht was 1-2.

Kruce Miller was 3-4 for Fayette with two doubles. McNamara had a double. Montpelier 5, PHS 4

Traveling to Montpelier, Tuesday, April 17, the Blackbirds suffered a 5-4 loss in eight innings.

Knotted at 4 heading into the bottom half of the eighth, the Locomotives (5-6) scored to claim the victory.

Travis Beck suffered the loss on the mound. In seven innings he gave up five runs (three earned) on five hits, struck out five, and walked nine.

After a scoreless first inning Pettisville crossed the plate twice in the second. The Locos tied the score with one run in the bottom of the second and one in the third.

Traveling to Edon, Thursday, April 19, PHS held a 6-5 lead going into the bottom of the seventh when Edon (9-5, 5-1 BBC) dropped the bomb and scored twice to edge out the Blackbirds 7-6.

Noah Miller suffered the loss. In 1 1/3 innings he gave up two runs on one hit and walked two.

The Birds had just three hits. A. Roth had two singles.

Tinora, ranked second in Division IV in the Ohio Baseball Coaches Association poll, scattered 12 runs and 13 hits over five innings while the Blackbirds crossed the plate once in the bottom of the fifth.