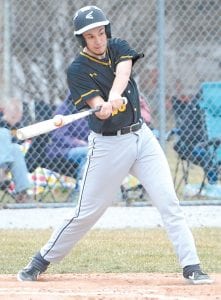 Jake King had a pair of base hits in two games against Montpelier last week.– photo by Mario Gomez

The Locomotives scored three runs in the sixth inning to break a 1-1 tie and defeat the Birds 4-1, Tuesday, March 26, at Montpelier.

Tommy McWatters recorded the loss on the mound. In one inning he allowed three runs on two hits, struck out two, and walked two.

The Birds recorded four hits. McWatters hit a double, while Logan Rufeancht, Brayden Barrett, and Jake King each had base hits with Barrett getting a run batted in.

The Birds’ only run was in the third inning. Montpelier had two runs in the third, fifth, and sixth innings, three in the fourth, and one in the seventh.

PHS had four hits. Nate Keim had two base hits with an RBI; Horning and King each had one.