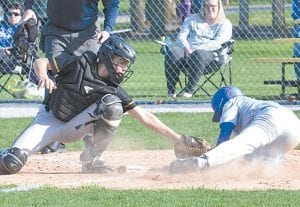 Josh Horning was the winning pitcher. In four innings he allowed one run on three hits, struck out two, and walked two.

Each team had seven hits. Horning went 2-4 with a run batted in.

Edon gave up only two hits as the Blue Bombers defeated the Birds 12-1, Tuesday, April 23, at Pettisville.

Logan Rufenacht suffered the loss. In four innings he allowed five runs on seven hits, struck out three, and walked one.

Horning was the hard-luck loser. In one inning he allowed five runs on two hits.

At the plate, Horning had a double and an RBI. Rufenacht and Keim each had a single with an RBI, and King had a base hit.