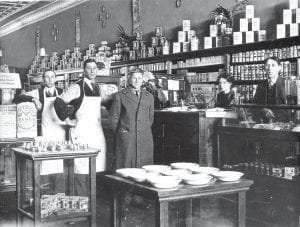 Hub Grocery The interior of the Hub Grocery, first started by Henry S. Winzeler, who founded the Ohio Art Co., in Archbold in 1908. He moved the company to Bryan in the fall of 1912. The grocery was in the south room of the Peoples State Bank Co., on the west side of North Defiance Street, which is now the Child’s Investment Group building. It was Archbold’s first real grocery store. From left: Howard T. Schaff, co-owner, formerly of Bryan; Olley Bourquin, clerk; Ora Nofziger, clerk; Myrtle Claire, cashier; and John P. Rinkel, formerly of Bryan, co-owner. They delivered groceries six days a week from a horse-drawn wagon. 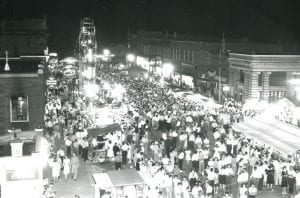 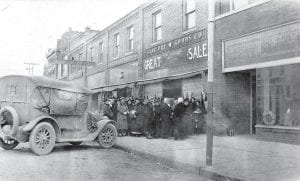 Locals respond to a Star Dry Goods sale advertised in the Archbold Buckeye in the early 1900s. 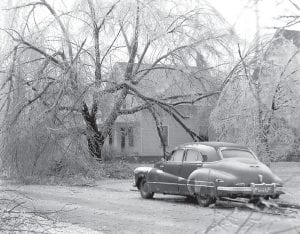 Ice storms were a common winter experience in the village in the 1940s, and the children had fun ice-skating on sidewalks and roads. Tree limbs and everything outside were coated in ice. Cracking limbs and branches were heard everywhere. W.O. Taylor’s 1940 Buick Roadmaster stands in front of the Don Parlette house on North Defiance Street, where his daughter, Valetta, was visiting Mr. Parlette. Later they became husband and wife.

With the photographer standing on the New York Central railroad crossing, this is how North Defiance Street blazed when newly installed streetlights were turned on for the first time. Residents called it The Great White Way. It seemed blinding to the eyes.