Photo of the Day at the Fulton County Fair

Winners of Best Dressed in the Costume Contest 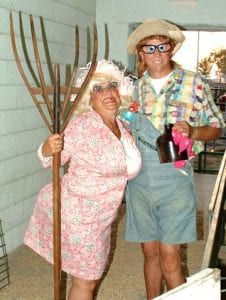 "Kissy Joe and Mimi Joe," aka Chris and Marilyn Rychener, Pettisville, show off for the camera prior to the 4-H 400 Back Seat Driver Contest, Friday night, Aug. 29 at the Fulton County Fair.

4-H advisors added the event to have more fun at the fair. They came up with the idea when they were stuck during a blizzard in Columbus during a 4-H volunteer’s convention early this year.

Each team was composed of a male and female advisor from 4-H clubs in Fulton County. The woman was the "back seat driver," and had to tell the male driver, who was blindfolded, how to get through an obstacle course as he drove a golf cart.

The event also had a "best dressed" costume contest, which the Rycheners won.

Alas, the Rycheners didn’t win the event, as Chris almost drove through a protective fence into the crowd. But everyone had fun!