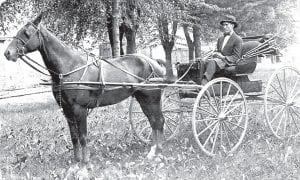 Old Photo: Jacob Schaffner, a Fayette farmer on St. Rt. 66, has his horse and buggy hitched up and ready to speed down the country road to pick up his true love, Mabel Leu, who later became his wife.–Antique photo taken in 1917-18, now the property of Gene Schaffner

Students Don’t Need To Take So Many Tests!Let’s Not Add Paperwork To Teachers’ BurdensGolden Notes Of Archbold’s Memorable Past